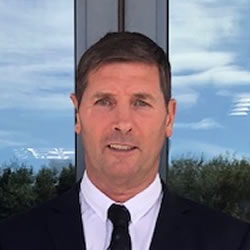 Alan started out in life as a barrow-boy, ferrying luggage to and from the bus and train station (both were located at Euston Road in those days) in a cart he had made for himself, as a means of making a small income. This was a popular occupation for young lads in those days, and Alan showed early entrepreneurial skills, when he recruited other boys to join him and form a small team, cornering the market in Morecambe.

Following this, he entered the Marines, aged 17, which gave him an opportunity to travel the world and make some great friends, many of whom he still keeps in touch with today, and some of whom attended his recent 60th birthday party. Most importantly of all, the Marines gave Alan an opportunity to train hard, focus on his goals, become very physically fit, and introduced a strong sense of discipline into his daily life; skills which he has since used to develop Lingwood Security Management (LSM) into one of the UK’s foremost providers of security services.

Alan enjoys travelling with his wife Jo, taking time out to see new places in the world, plus return to some of the places he went as a young man in the Marines. He still has a strong sense of adventure and thrives on adrenalin, so he has incorporated some extreme sports into his recent travels, including a bungee jump, a glacier walk, a Siberian-style trek against the clock, fresh water swimming in a freezing cold lake, running up Table Top mountain, diving with sharks and even some ballroom dancing! In his own words, he might be 60 but he still wants to ‘live life to the fullest’.

Whilst away travelling, Alan likes to keep a keen eye on the business back home, and is in daily contact with the office and management team to ensure everything is running to plan, and to oversee key decisions when required. The business is in the very capable hands of his son, Alan Lingwood, and is flourishing under his command. On the subject of his son, Alan said: “Alan Junior has really got stuck in to his job and is going from strength to strength. It is with immense pride that I can take a step back and watch him take the business to greater and better things. Where previously I would have been heavily involved in client meetings, Alan Junior is now handling that side of the business on his own and is doing a brilliant job. I look forward to seeing where he will take this business in the future.”

Having started the business locally in 1995, with a focus on excellent customer service, smart presentable staff and above all, a commitment to the highest standard of security provision, Alan has overseen the growth of LSM into a nationally recognised and well respected security management provider. The company is now working with large organisations across several sectors in the UK, including Balfour Beatty, Network Rail, UK Power Networks, J Murphy & Sons, The NHS, Lakeland Ltd, Amey and Costain, to name just a few.

Alan and his wife Jo enjoy spending time in Brazil, and in December 2016, Alan received an investment VISA from the Brazilian Government in return for his investment and contribution to their economy. This will allow him to spend some time there when he eventually retires. Alan was keen to stress that he believes if somebody wants to live in a country, they should be prepared to invest in the economy of that country and bring something positive to the table.

As a keen supporter of Brexit, Alan was very vocal on social media in the build up to the vote. Theresa May (Prime Minister) visited the offices of LSM in July 2015, prior to her becoming Prime Minister, and Alan held many discussions with local MP David Morris on the subject. Alan is very passionate about his country, and feels that everyone should get together to make Britain great again.

When reflecting on the past, Alan is typically modest about his achievements. “Anybody could do what I have done. It’s simply a matter of drive, enthusiasm and determination. I was a child with ADHD who was expelled from school and given no hope for the future. However, I decided I wasn’t prepared to accept that destiny, so I got stuck and have worked hard all of my life to get here. Life is about taking what you’re given and doing the best with it that you can.”

Looking to the future, Alan feels the business is in strong hands, with a great team of staff to handle all the pressures of work, and has no plans to retire as yet: “Our guards do us proud every day. The firm is here to stay, providing local jobs as well as national opportunities for anybody who is prepared to work. I have no desire to retire yet, we have a busy year ahead of us at LSM. However, I am gradually handing more responsibility to Alan Junior and the rest of the management team, which gives me great confidence. I hope I continue to instil my passion for security into all of my staff, and one day, perhaps my grandchildren may like to join the business too.”